Walk from Southwark to Blackfriars Bridge

When the sun is out and the day is mild, I love to walk and explore London. That late summer day, I had time and weather gods were benevolent. I decided to explore the North Bank of the river Thames. When we initially moved to London, I had memorized the names of the bridges on the river and had always wanted to walk from one bridge to the next on the north side. My husband, who is usually there to explore with me, was busy in meetings. But why waste a perfectly good day! So, I set out on my own.

Since I had no fixed plan, I decided to make my starting point close to Saint Paul’s Cathedral. I have explored that area once as a part of Mary Poppins walking tour. So, I decided to move away from the Cathedral. My first stop was Host Cafe for a cup of coffee. Host Cafe is interestingly situated inside a functioning church.

The church, St. Mary Aldermary is a where the Moot Community prays. This church was built by Sir Christopher Wren after the original was destroyed in the Great Fire of London. It is a beautiful church with pure white plaster fan vault ceilings and massive pillars. The colorful stained glass windows and the organ add charm and contrast. The cafe sits on a corner near the entrance. You can pick up your coffee and take a seat in one of the pews in the nave. Like any normal cafe there were people having meetings or a chat over a cup of coffee all around me. But the setting of a church is so unusual for a cafe that I enjoyed the whole experience of it. Even if you are not into coffee do stop by on a weekday to enjoy the unusual atmosphere.

I came out of the cafe and walked exploring the alleys and lanes. Lot of the places people had come out of their offices for a mid-morning smoke or a chat with colleagues enjoying the lovely weather. I soaked in the atmosphere admiring the old pubs and shops on the cobble stoned streets. I moved on by instinct seeking the river. I knew I was going in the wrong direction but couldn’t resist going on to Southwark Bridge to check out the river and the views. I crossed the river on to the Bankside. Totally Thames 2019 was going on at that time. I noticed The Ship of Tolerance near the Tate Museum. The sail of the boat was created by the young people of London. When I had read about this installation by Ilya and Emilia Kabakov I had wanted to see it.

I crossed the river again on the Millennium Bridge. I enjoyed the views of St. Paul Cathedral with the throngs of tourists on the bridge. Some views never get old for me. The next area was Blackfriars. I entered the back streets of Blackfriars. There are pretty narrow alleys, streets, and squares.

I walked to Ireland Yard. It is actually a narrow alley. Its fame is thanks to its one past resident, Shakespeare. Also, before Henry VIII abolished the Church of England, this alley was an entrance to the Blackfriars Monastery. 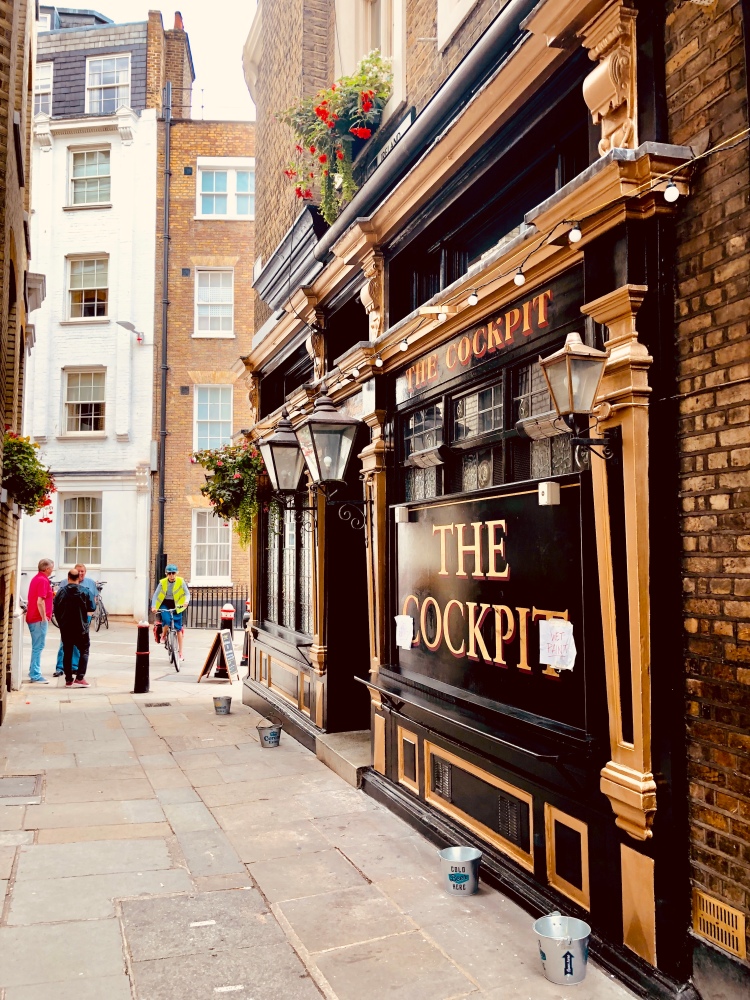 One of the churches in that area was St. Ann Blackfriars. The church no longer exists but the churchyard is there. It’s a quiet little green space with a massive old tree in the middle.

I had read somewhere that Shakespeare’s house had faced this Churchyard. I moved on to the Playhouse Yard. It is a small little square which once had an Elizabethan Playhouse, hence the name. Shakespeare partly owned the theater. Only thing that remains today of the original Playhouse is part of its black wall.

Since I was following the river and the bridges, I moved towards it, seeking the way out of these little squares and alleys. To my surprise, I came upon the courtyard of The Worshipful Society of Apothecaries.

London never ceases to amaze me! These are the kind of architectural landmarks I love to come upon on my walks. I know it has existed for centuries and lots of people know about it, but when I came upon it, it was as if I discovered a secret and marveled upon my discovery. I enjoyed the peace and tranquility of the pretty white and blue courtyard. I couldn’t go inside to see the rooms and the art within, but I was happy just to see the courtyard. As the name suggests it’s an active medical society. It was established in 1617.

I am going to end this blog post here. I walked all the way to Embarkment that day, touching Hungerford Bridge. I would like to cover the areas between Blackfriars and Embarkment in my next blog post. Believe me I just loved that part of my walk too.

PS. The distance between the Southwark Bridge and Blackfriars bridge is 1.19 miles if you walk right on the river front.

During this walk I crossed Southwark Bridge and Millennium Bridge.

In all there are 33 bridges on Thames in the greater London area. These include railway and footbridges.

For this blog I have started from Southwark Bridge. I have written about area between Tower Bridge and London Bridge in my previous blog, The Summer Pleasures of London Life.

Hi! I love to travel, I love art and architecture, I enjoy cooking, and, more recently, I've been bitten by the photography bug. My family has always respected my need to explore and observe the world outside the window. They always leave the window seat for me, be it in a car, train, or plane. They are always walking along side me when I am out exploring. I am shy by nature so I guess I am happiest when I see, observe, and imagine. When we moved to London, it was a dream come true. This city was one I read about in books and dreamed about as a child. I had visited it many times as an adult before we actually moved here, but being part of the life here has brought me out of my inertia and made me pick up the pen again. My ever present phone helps me capture the images of what I see. One fine day my pen and phone made me sit down to write my first blog post! View more posts