Christmas in London! The thought of it had excited me since the summer. Though, I had to tell myself a few times that it will be cold. After spending part of the last winter here in London, I shivered at the thought. As it is, I hate winter and the whole idea of walking on slushy streets with no sun in sight for days did put me off London last winter a bit.

London, you surprised me! First, it wasn’t unbearably cold. Second, London transformed into the Christmas spirit beautifully. Third, people still do outdoor things. They bundle up, sit with a blanket on a sheepskin covered bench and have their warm mulled wine. But more about that later.

I did miss New England fall. Autumn is not so dramatic here. But my autumn went quickly in researching London Christmas. I was checking and making a list all the time. Sometimes I was bombarding my daughter’s inbox with a list of things to do. My husband probably got earful at dinner time about when this lights are going to be turned on and when that Christmas market was going to open. My children were going to arrive in London for Christmas so the whole idea of sharing Christmas with them in London made me ecstatic.

The only thing that was crazy was the crowds. I have never seen so many people on the streets. Sometimes even while walking you were stuck in pedestrian traffic jam. Finding Uber or a black cab? Oh no! Even if by luck, you cozily settle in one, you would be settled in there for a long time. The tube? You might have to wait for a train or two before you can push yourself in one. Ah, the famous red double decker London bus you asked! Well lots of fun if you move. My husband and I decided to go for a dinner to Covent Garden once because we wanted to see the Covent Garden Christmas lights.

It took us more than two hours to reach and that too by changing several modes of transportations. By the time we reached, the restaurants were taking the last orders of the night. But on a bus when you are in the first row, upstairs it is fun to see the lights, the decorations and the people down below. I read somewhere that you have to take bus number 139 if you want to see the best Christmas lights around London. It passes through the streets that are must see. 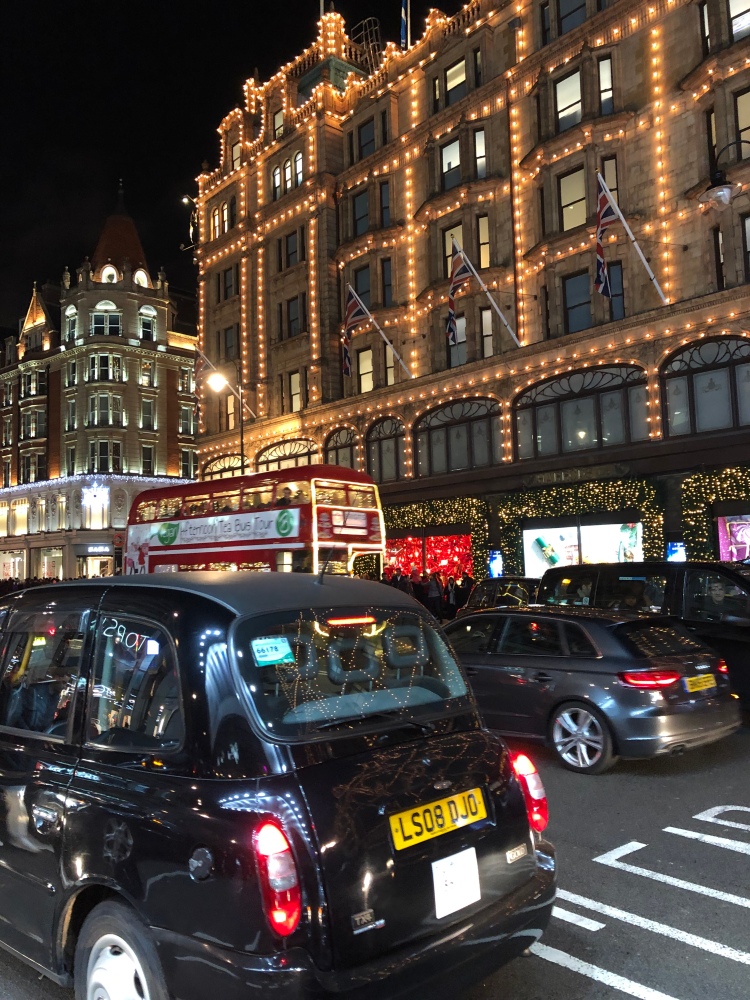 We missed out on a few things (like the 139 bus). There was just not enough time to do everything.  But let’s start. I am going to write about the things we did.

One of the first things we did was to go to the Chiltern Street night Christmas shopping event. I love that street with its iconic architecture of red and white buildings. It is famous for one of London’s best restaurants, Chiltern Firehouse. This night of Christmas shopping took us back in past. I could imagine the village main streets in England during the Christmas season. Festive, cheerful, and friendly, the street had the vibe of a village Christmas of a bygone era.

With warm mulled wine in hand we wandered up and down the streets weaving ourselves in and out of the family run shops. We found a place to sit and enjoy the street music. The Indian music group that performed was absolutely wonderful.

We came home with the Christmas spirit in our hearts and excited to explore more of London’s Christmas events. The official Christmas season had started. 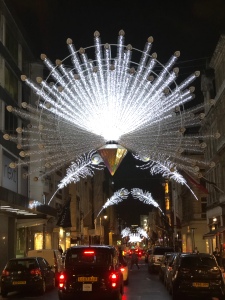 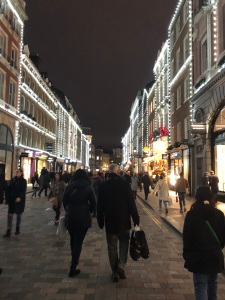 I will post pictures of some of the major streets and areas decorated in Christmas lights. Apart from wandering these streets to see the lights, we visited a few Christmas bazaars. We even joined a Love Actually movie themed Christmas walk. It was such a wonderful evening walking the back streets in Mayfair admiring a Christmas tree here, or a decorated hotel building there, talking about the movie till we reached Oxford Street and the heavens opened up. It poured. We braved the cold rain for a block or so but chickened out and said goodbyes to our guide Amber and decided to head home. The small churches she showed us were definitely worth a second look. If you are that movie fan as I am, you will probably enjoy the tour. I wish it had not rained and we were able to finish the tour. 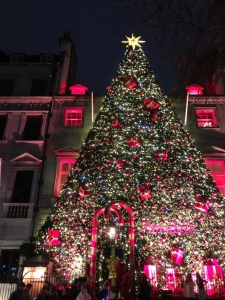 I am including some pictures of the Christmas bazaars. The food was the best part of attending these bazaars. Okay, ooey gooey chocolate dripping from my marshmallows and strawberry s’mores-on-sticks or Dutch pancakes smothered in Nutella were totally worth removing my hands from my gloves. I noticed that most of the stalls across the Christmas bazaars were the same. They were selling similar products. But the first couple of times to go out at night and walk in the cold checking out the stalls, laughing like little kids with a mouthful of hot chocolate sauce or just absorbing the atmosphere and the spirit of the season was an absolute delight. I would definitely recommend it. Do at least one market at night. We went to quite a few but my favorite probably was the one between Tower Bridge and London Bridge on the Thames. Generally the stalls were made to look like log cabins or Swiss chalets.

We even saw Christmas lights at the London Zoo. I had short listed two Christmas light illumination pathways. The most famous is the Kew Gardens lights. But that was too far and I wasn’t brave enough to walk in the Gardens in the cold night air. So we decided to do London Zoo lights. The ZSL Zoo opens for people in the evening after they put the animals to sleep in their cozy abodes. We walked through the amazingly illuminated light and laser installations covered path which weaved through the Zoo.

And the final cherry on our Christmas celebrations in London was watching the New Year’s Eve fireworks on the Thames with I don’t know how many thousands of people. We made ourselves comfortable on the sidewalk across from the London Eye on the river bank several hours before the show was about to begin. Luckily it wasn’t a particularly cold night. Sitting on the sidewalk we passed time watching people waiting for midnight. I didn’t care how long we waited on that cold slab of concrete. We were together. With the bongs of Big Ben and fireworks over London Eye, we welcomed 2019.

Ice skating is set up all around London. One of the things to do here is ice skate during this season. Ice skating on rooftops or ice skating in front of museums with their grand buildings as backdrops were sights to see.

We had no guts to step on one but that didn’t stop us from going to check them out. Another thing that appealed to me was all kinds of Christmas decor. The cafes and restaurants transformed themselves into Christmas Wonderland.

It seems Londoners love to do season appropriate outdoor things. I loved the idea of restaurants and bars offering tables in log cabins, rooftop cottages, beautifully decorated terraces, or even igloos. 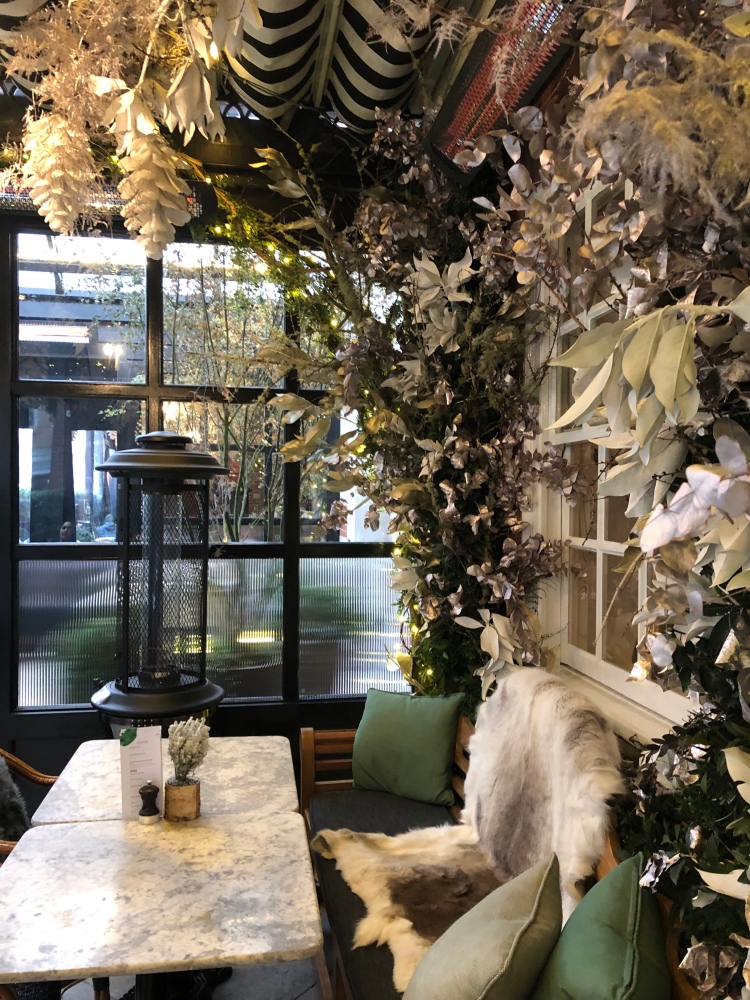 If you ever want to do these kinds of things, start planning early and book the tables. Sometimes the cover changes are steep but for somethings it’s totally worth it.

There are quite a few things we did apart from these and there are a few things we didn’t get time for. I took close to 500 pictures, we walked maybe half a million steps over the month of December and probably put on a several pounds chomping down the Nutella covered desserts!

Hi! I love to travel, I love art and architecture, I enjoy cooking, and, more recently, I've been bitten by the photography bug. My family has always respected my need to explore and observe the world outside the window. They always leave the window seat for me, be it in a car, train, or plane. They are always walking along side me when I am out exploring. I am shy by nature so I guess I am happiest when I see, observe, and imagine. When we moved to London, it was a dream come true. This city was one I read about in books and dreamed about as a child. I had visited it many times as an adult before we actually moved here, but being part of the life here has brought me out of my inertia and made me pick up the pen again. My ever present phone helps me capture the images of what I see. One fine day my pen and phone made me sit down to write my first blog post! View more posts

2 thoughts on “Christmas in Wonderland”